The Garden at 485 Elm intentionally attracts pollinators like bees. It’s good for our crops that require pollination, but it’s also critical for bees.

What Do Bees Have to do with It?

A year ago, when I thought of “bees,” I envisioned my father ducking as a yellow jacket swarmed close to his head. He would reach for a fly swatter if he was inside or swat his hand through the air if he was outside, but either way, the yellow jacket was not a welcome visitor. One sting could land him in the hospital (in the best case scenario) if he doesn’t give himself a shot of epinephrine or swallow the Benadryl pills in time. I am embarrassed to say that it wasn’t until a year ago that I learned: a) yellow jackets are not bees (they are ground nesting wasps) and b) the importance of bees as pollinators—a fact that cannot be over-emphasized. I am most likely preaching to the choir here, so forgive me for sharing information that many of you may already know. In the very least, this information will reiterate the importance of what you already know, and perhaps, toss in a few nuggets of information you didn’t know. For those home gardeners who don’t know that much about pollinators but want to learn more (I put myself squarely in that category), hopefully this will give you a little learning launch pad. For all of us, it’s essential that we know as much as we can if we want to keep eating the food crops we know and love, to put in bluntly.

This past March I attended “Beetles, Bees, Butterflies: A Symposium on Vermont’s Pollinators,” sponsored by the Vermont Agency of Natural Resources. Scientists, researchers, government agencies, farmers, gardeners, extension agents, and others gathered for the day, overlooking Lake Champlain from a conference room at ECHO on Burlington’s waterfront. The goal of the gathering was to disseminate information about the myriad and complex challenges facing Vermont’s pollinators, and to help identify strategies to protect them. What I learned, ultimately, is that as gardeners, you and I play an important role; we do not need to be scientists or experts to do so. We need to be advocates who know enough to take some simple yet powerful steps.

Nearly ninety-percent of flowering plants in the world (including two-thirds of crops) rely on pollinators, with pollination accounting for roughly ten-percent of the annual economic value of agriculture in the United States (worth more than $10 billion per year).[1] For many crops (including apple, blueberry, tomato, and squash), the most important of these pollinators are wild bees, of which there are more than 4,000 species in North America, and 20,000 in the world. In Vermont alone, there are 275 bee species.[2] Globally—as well as locally here in Vermont—we’re facing a crisis: both managed and wild bee populations are in serious decline. There is evidence in Vermont that nearly half of native bumble bees have been imperiled.[3] For managed honey bee species, the effects of worldwide transportation of parasitic mites and diseases, nutritional stress, and exposure to pesticides is taking a huge toll. For wild bees and other pollinators such as butterflies, flies, and beetles, habitat loss, pesticides, pathogens, and climate change are wreaking havoc—so much so that three bee species in Vermont (rusty-patched, Ashton’s cuckoo, and yellow-banded bumble bees) were recently afforded protection by the state’s Threatened and Endangered Species law. Globally and nationally, the alarm bells are starting to sound: in February, the United Nation issued its first report on the status of pollinators; and President Obama has identified pollinators as a critical issue, releasing a White House memorandum outlining expectations that include adding millions of pollinator habitat over several years.[4]

What you can do as a gardener

The situation is pretty dire, but the good thing is you can take steps that might seem small compared to the grand scale of the problem. But these steps are actually critical. Imagine the impact if all gardeners considered the needs of pollinators as studiously and reverently as they do the timing of perennial blooms or the requirements for keeping tomatoes free of blight.

The concept that I found most thought provoking coming out of the day of presentations and conversations about pollinators, is the redefinition of a garden’s aesthetic appeal. We’re at a crucial ecological junction where beauty now must run deep. A gorgeous and fruitful garden must now incorporate messy areas, because what is as transfixing as neat and tidy perennials is the swarming and buzzing of pollinators. The vivacious chaos of bees, beetles and butterflies is an urgent beauty I am eager and willing to work into my garden plan. 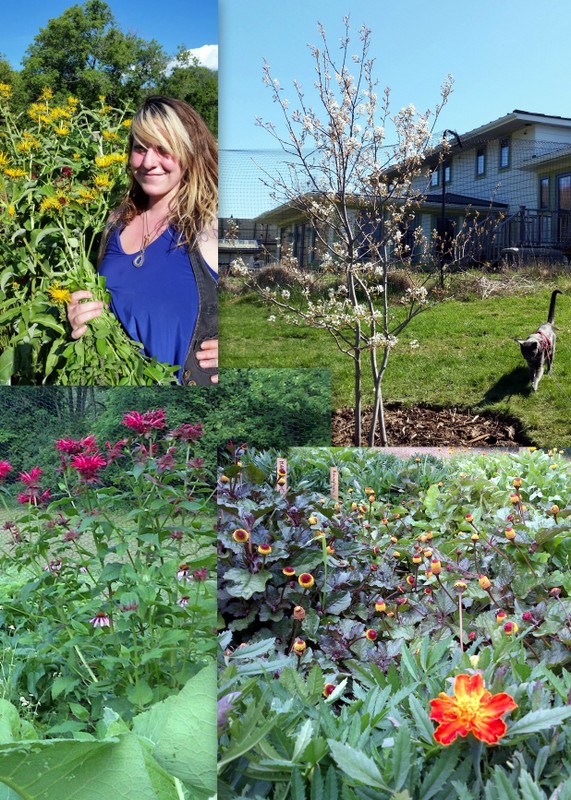 [4] “Creating a Federal Strategy to Promote the Health of Honey Bees and Other Pollinators,” June 20, 2014. https://www.whitehouse.gov/the-press-office/2014/06/20/presidential-memorandum-creating-federal-strategy-promote-health-honey-b