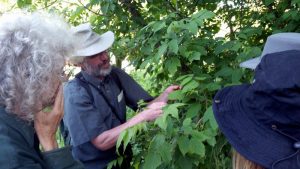 On a beautiful Tuesday evening during National Pollinator Week, naturalist and gardener at 485 Elm Ned Swanberg led a group along the river. Ned’s presentation, “Living with the North Branch,” introduced us to our follow residents in the plant and animal world.

Plants include natives like the resilient box elder, exotics including certain grasses, and invasives such as honeysuckle and Japanese knotweed.

It turns out mosquitoes are important pollinators. And that sumac comes in male and female, and the berries make good tea.

We watched a lady beetle rise up and look fierce to dissuade us from attacking her.

As for swimming in the river: South of the North Branch Nature Center, there’s the potential for exposure to sewage-borne illness. Our community’s orientation still faces away from the rivers because of their former primary use as waste streams. The rivers are slowly coming back to life since the Clean Water Act of the 1970s. We have a long way to go.